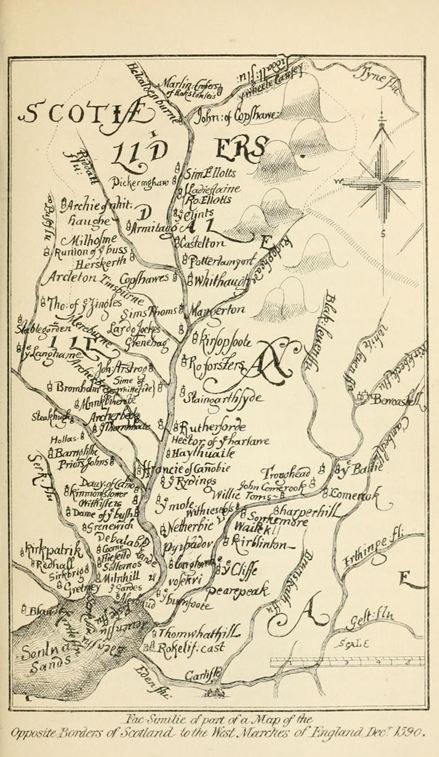 What are the chances of being able to research ordinary Scottish ancestors from the 16th century ? Normally, the answer has to be next to none. If you weren’t nobility or titled then almost certainly no records will survive to even hint at your existence. Its too early for almost all surviving church records , except perhaps for the minister himself. Almost no headstones survive from that era. And what about property transactions, however unlikely that may be for an average ancestor ?  Well the  register of sasines was only started properly in 1617. A DNA test might demonstrate genetic succession but it wouldn’t tell you anything about 16th century lives.

But what if your actions presented a real risk to national and international security ?  What if your area was considered to be beyond the law ?  Then , not so different from modern times, the state was interested and your actions would be spied upon, noted and reported to the highest authorities in the land. And thankfully, most of this intelligence has survived to the present day.  As a result, there exists a marvellous legacy of information about the actions of many families who lived close to the Anglo-Scottish border and supplemented their meagre incomes with cross-border crimes of theft, blackmail, ransom and murder on a regular basis throughout the 16th century.

The Calendar of Border Papers is a compilation of intelligence gathered on the English side of the Border between 1560 and 1603 which includes complaints made by English residents about crimes committed against them mainly by Scottish reivers, letters between various English officials and indeed the Queen herself on occasion, and reports from spies and other Border officials about key individual troublemakers. On the Scottish side, the Register of the Privy Council of Scotland deals with pressing matters from the southern frontier and names many border troublemakers too.

These sources and others have allowed us in modern times to examine the importance of kinship in defining how the Border reivers operated and how the various families, closely allied to very particular territory on the Border , interacted with one another. Genealogy is all about family relationships and nothing defined the Border more than the fierce family loyalties of the time.  The use of To-Names in official descriptions helps us to imagine the character,appearance and indeed humour of some of our ancestors whether it’s Willie ‘Redcloak’ Bell, Ill Will Armstrong or Archie ‘Fire the Braes’ Elliot. The ringleaders played a long strategic game with the authorities. The calculated way in which many of them married girls from across the Border succeeded in undermining the authorities of each country by creating important cross-Border family alliances.

So the study of the genealogy of the Border reiving families allows us a unique insight into 16th century life however untypical it may have been. Like Sir Walter Scott before us (who was directly descended from a notorious reiver) , we may choose to romanticise this undoubtedly brutal lifestyle , but if that helps to bring our history alive and make it feel relevant for us today then is that such a bad thing ?  I contend that the story of the reiving families of both Scotland and England that we can construct from contemporary sources is an absolutely fascinating one and one that I’m delighted to be involved with. We may not always be able to identify specific individual ancestors in this era but we can build up a considerable picture of their kinsfolk and where and how they lived. For me genealogy is as much about understanding contemporary lifestyle of the greater family groups than it is about a single name in a family tree.

20 thoughts to “The joy of researching the Border reiver families”