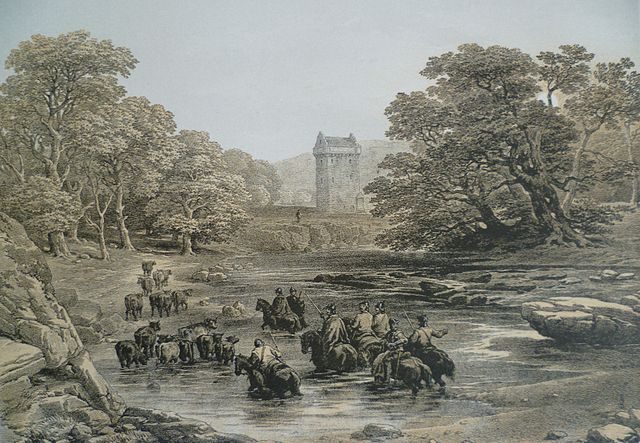 I’ve often seen it suggested that what with the wholesale hanging of reivers in the years following 1605 and the considerable exodus of reiver names to the Ulster Plantation after 1609, that areas like Liddesdale and the Debateable Lands of Canonbie were radically changed in the years that followed. And indeed most of the killing, plundering, blackmail and moonlight riding did stop. But what if we were able to see what families were living there in place of the reivers some twenty years later ?

By 1621, the Earl of Buccleuch had acquired pretty much all of Canonbie and much of Liddesdale. And thanks to the historical rental records of the Buccleuch estates we can see exactly who was tenanting all their farms in Liddesdale and Canonbie as early as 1630. I have transcribed the information as best as I can and the results may surprise you. The rental lists are shown in the two links below.

In Liddesdale you can see that it’s pretty much all Armstrongs and  Ellotts with some Crosers , Nixons and Hendersons

In Canonbie it’s Armstrongs, Irvings and Bells with a few Grahams, Beatties and Littles for good measure. So pretty much the same mix of names that would have been found 30 years earlier.

What’s also noticeable is a smattering of the most infamous reiver families live on – there’s no less than 3 sons of Kinmont Willie and also Lancie Armstrong of Whithaugh. There’s a Clement and a Quentin Croser – definite echoes of their distinctively named reiver forebears.

For some families at least tenanting under  Buccleuch estate management  brought stability and longevity. My own family were Buccleuch tenants in Canonbie for at least 250 years.

10 thoughts to “Reiver Families of Liddesdale and Canonbie in 1630”