At the end of the 18th century, there was considerable concern in Great Britain that the post-revolution French might attempt to invade the country. As a result, names were collected locally, parish by parish , of able-bodied men who could form a militia if required to do so. At first it was a voluntary activity, until by 1802, it was expected that all 18-45 year old men would have their names put forward in the parish for a ballot to form a local militia. A very few occupations were exempt such as doctors. 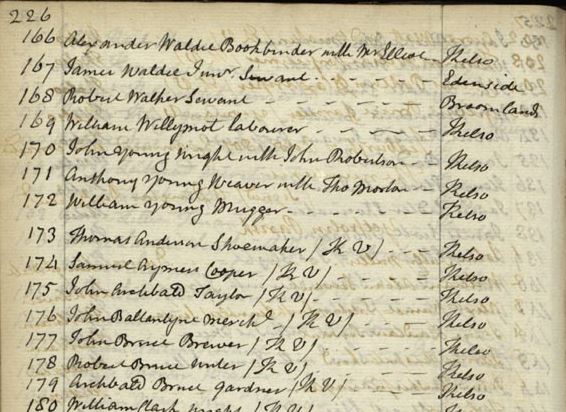 Quite a number of these parish militia lists survive today, sometimes in local archives, or sometimes buried in estate papers and the like. Roxburghshire is extremely fortunate in that not only has an entire Lieutenancy Record book survived with militia lists from all parishes in the county from 1797 through to 1802, but it’s all posted online as part of the Scottish Archive Network resource at http://www.scan.org.uk/researchrtools/lieutenancy.htm .  Have a look for your own family – all the common Border names feature heavily.

The extract above shows an example from the Kelso parish list – we see names and occupations, sometimes family relationships are mentioned and sometimes employers are named. It really is a valuable ‘census substitute’ for family historians. I was intrigued by no. 172 shown in the extract described as ‘William Young  Mugger’ .

It turns out that William was not someone who hung around dark alleys waiting for a victim, but , as I learned from the Concise Scots dictionary, was in fact an itinerant tinker. The name derived from someone who at one time sold earthenware mugs.